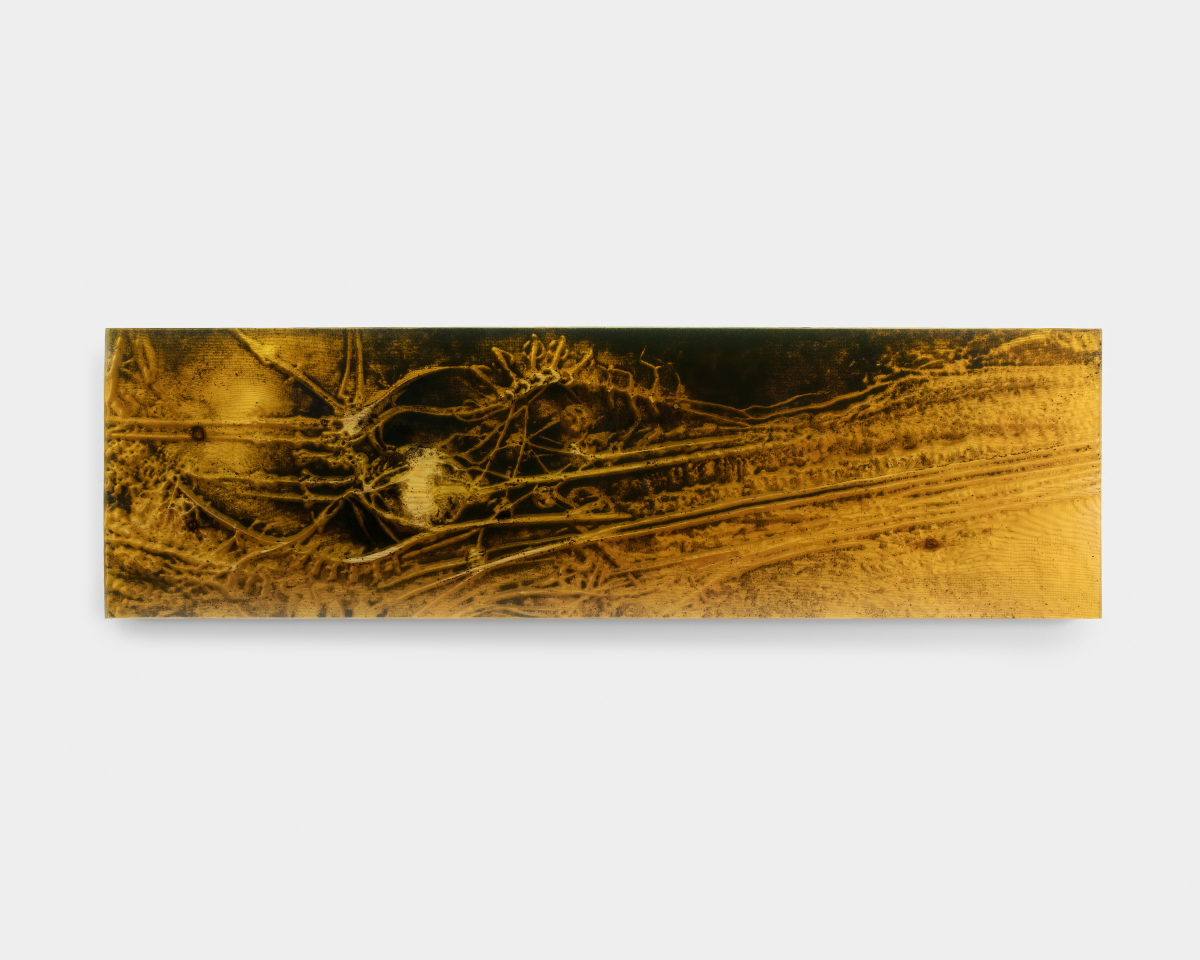 Jura Shust, Walking, knocking on the roots, and shaking the spruce paws #5, 2022

Post-holidays, Christmas trees are laying on the streets of New York: some are covered in plastic bags, like discarded bodies, and others are tossed here and there, secluded or stacked in piles. The pleasant whiff of conifers is mixed with the smell of underground steam escaping from manholes and the smell of trash juice leaking on sidewalks. 300 million years ago these trees created for themselves such a successful genetic make-up that they ended up outliving dinosaurs. As ancient beings, conifers can normally live on average hundreds of years, and - in some cases - even thousands of years. The tree’s childhood and youth last ten times as long as ours, and its complete life span is at least five times as long. Perceived as both protective and ominous, the forest has been the birthplace of many myths and folktales from prehistoric times to the present day. For instance, sacred coniferous groves have been used as ancient pre-Christian temples, human sacrifices were made to tree spirits, and individuals were paired with trees, as twins, in transcendental unions.

In his exhibition Coniferous Succession, Jura Shust highlights the art of meaning-making and presents with an anthropological interest the forest as an ancient, sensual territory of non-linearity. The artist unfolds a myriad of overlapping mythologies and spiritual beliefs that have been knitted around coniferous forests by multiple cultures in search of a connection with divinity. Shust’s interest in depicting the relations between ritual, escapism, and contemporary scientific research, starts from the native inhabitants of Eastern Europe, more specifically from the Finno-Ugric tribes. Echoing through the exhibition space is a sound piece: a collage of multiple ethnographic sources that tells the story of the spruce and the human’s symbiotic relationship. We hear of rituals involving breast milk, blood, or stillborn babies buried under trees; we hear of trees that whisper about the future, have the ability to bless households, of trees that bleed, and of trees that long for their twin-humans to find them. We also hear of trees that bless lovers, of trees that open their bellies to give birth after nine months, and of trees that help the departed ones pass on peacefully to the afterworld.

With Reflects and multiplies light Shust reinterprets an ancient lighting device made to hold a rushlight. Underneath it, a water basin devised to catch the falling flames, multiplying their luminance, is instead filled with pine resin. Shust shows how nature slides into everyday life through both new technical devices and folklore, becoming part of humanity’s most intimate functions: from birth to death, and everything else in between. For instance, in many Slavic beliefs, pine fire was associated with passion, lust, and procreation. Similarly, individual spruce trees were thought to be inhabited by the spirits of deceased people. Each tree was a vessel for a soul, and when the spruce lost its needles, the spirit - it was said - also left the tree.

Shust gathered pine needles from discarded Christmas trees around New York and arranged them on the gallery floor in the shape of a map inspired by the territory of prehistoric Europe. Resting on top is a smartphone playing a video of a fiery squirrel that runs up and down a tree, eponymously titled Coniferous Succession. The AI-generated creature represents the shape-shifting forest spirit common to both Slavic and Norse mythologies. This forest spirit inhabits the tree of life “Yggdrasil,” moving between worlds.

The tree of life, a symbol of immortality and connector of worlds, is also present in the central piece of the exhibition, Hardens on the surface and heals the wound. This large self-standing panel, composed of a two-sided laminated glass unit, holds a spruce branch soaked in pine resin. Violently cracked on one side, this piece taps into another ancient belief that coniferous trees have blood flowing through their veins. For if a wound is inflicted on a tree, resin emerges. In industrial resin collection, a sharp blade is used to cut into the tree, and every week this wound is renewed and extended, or new wounds are opened. Until all needles fall immortalizes this process, presenting two rows of metal cones filled with hardened, overflowing resin, placed vertically on the gallery wall like a frozen waterfall.

The stillness of an absence grows heavy in the exhibition and Shust captures this gradual disappearance from the world. The series of abstract works serially titled Walking, knocking on roots, and shaking the spruce paws are AI-generated drawings of plant forms, that resulted from feeding the AI the text of the sound piece echoing in the gallery space. The drawings were then machine-cut into pine wood and covered by soil to emphasize their meandering forms. A final coat of resin covers the panels, fossilizing the composition’s movement.

Shust reflects on the death symbolism associated with pine trees and looks at the multitude of pre-Christian traditions that have been preserved through folkloric and contemporary beliefs. Coffins, for instance, are still made of pine wood, branches of evergreens are used in funeral decorations, and conifers are still planted on graves. Shust shows how, in a literal way, a phytomorphic process takes place through death, where remains, through their mineralization, start to embody the attributes of plants, and molecular matter rises anew through a redistribution. Thus, the coniferous tree - as a symbol of both death and rebirth - is an ancient truth that is rooted in a pattern of biological interaction.

Coniferous Succession is in many ways a reminder of this circular interaction between systems, but it also depicts how humans and forests, in their co-evolution, have been in a dance of proclivity where meaning is projected and reinforced over the unknown. Despite what seems to be a beneficial uroboric balance, the ghostly presence in the exhibition implies that this projection, coming from a place of fear, will always be smothering the reality of kinship.

Jura Shust explores the relationship between ritual and escapism. Intrigued by semantic polysemy, informational intoxication, and initial desire for oblivion, he reflects on how the mythological overlaps with the technological. The sacral idea of incorporation of the human mind into a global network with its tendency for decentralization inspires the artist to redefine the concept of spiritual ecology. Shust’s practice merges sculpture, video, and installation to construct mental landscapes illuminated by ethnoreligious beliefs and flooded by biopolitical intentions. 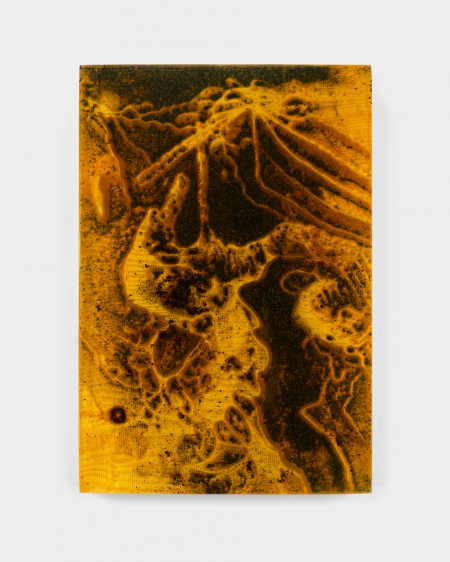 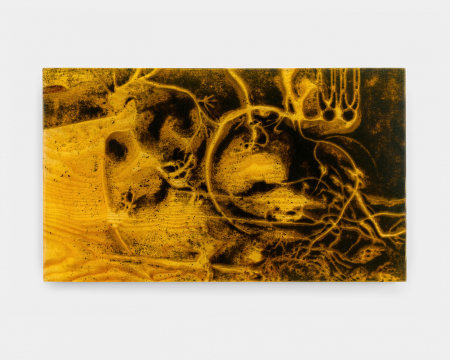 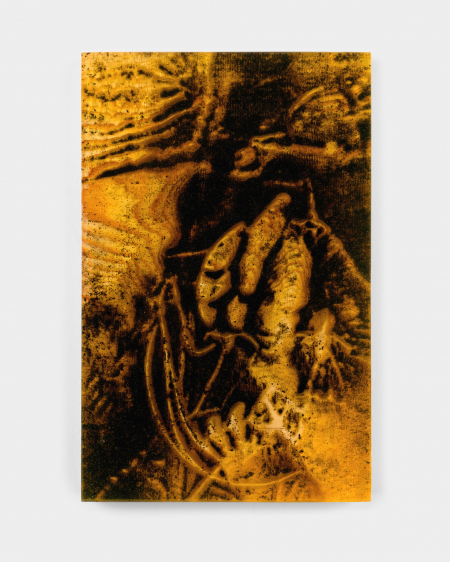 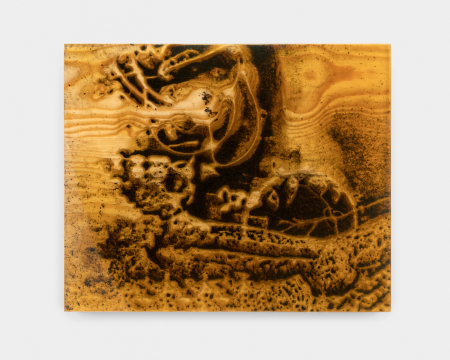 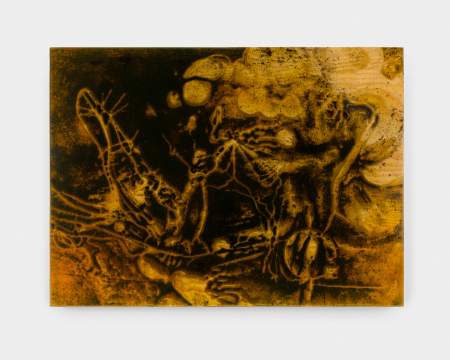 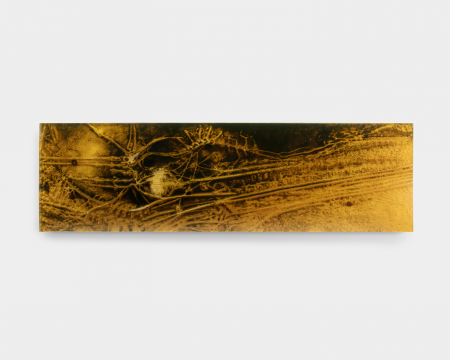 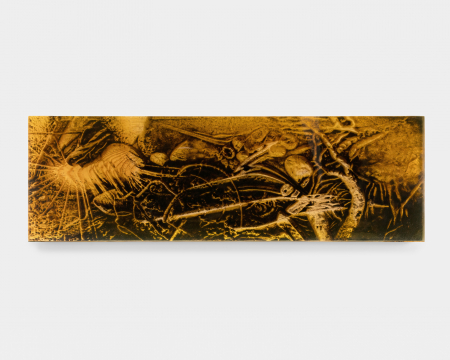 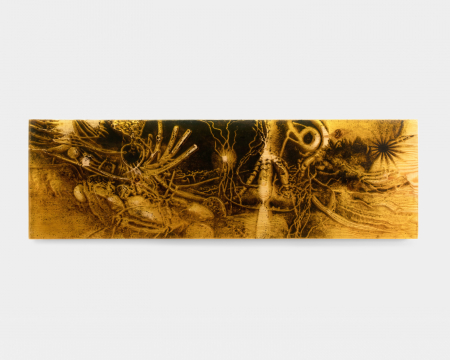 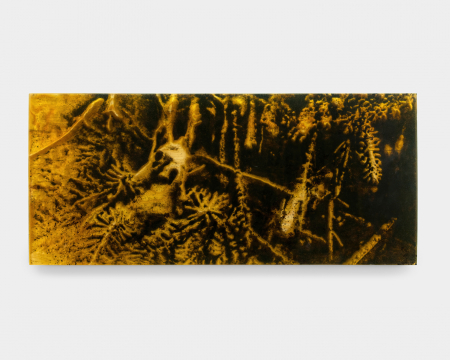 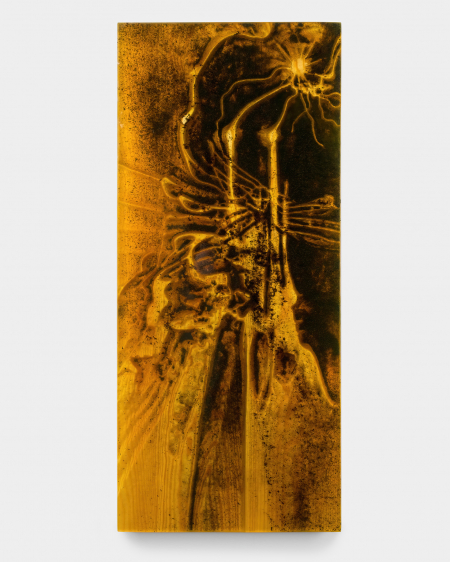 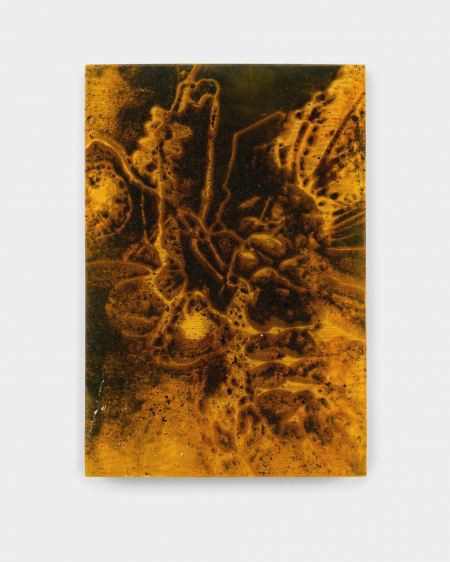 Jura Shust, Walking, knocking on the roots, and shaking the spruce paws #10, 2023.
Wood, soil, resin, 12.2 × 8.3 in / 31 × 21 cm
Jura Shust's Coniferous Succession is a Must See according to Artforum
ChatGPT May Well Rewrite the Rules of the Art World. But Art Also Shows Us the Limits of What A.I. Can Do, by Tim Schneider (Artnet)
{{artists}}